A Wonderful Night of Food & Community

Thank you to everyone who responded to or attended the Spirit and Place Festival event Sunday, Nov. 15: "Local Food Trends: Growing Community, Economy and Mutual Delight." The response was truly overwhelming. I received nearly 100 reservations - enough to double the event; a loud and clear indication that there is lots of interest in local food topics. A total of 64 people crowded into CitYoga and brought fabulous food for the potluck dinner, even on a night when the Colts played New England! Click here to see photos from the event.
Here's a brief summary of our topics and conversations and contact information for presenters if you would like to follow up for more information. I welcome additional insight from those who attended or have more information.

The Spirit & Place event this Sunday, Nov. 15, "Local Food Trends: Building Community, Economy and Mutual Delight" is completely booked. Please e-mail me if you would like to be placed on the waiting list: Gail@TheGoodsLife.com.
I will post a summary of the event later next week.
Thank you for your interest and enthusiasm about local food trends!
Posted by gail payne, apr at 7:45 AM No comments:

As a part-time fundraiser for some clients, one of my favorite mantras is: "Money follows good ideas."
The same could be said for food: "People (and money) follow good food."
(Photo: Matthew Jose, owner of Big City Farms, greeted shoppers at the Indy Winter Farmers' Market.)
It's no coincidence that the once salvage yard at 24th St. and Central Ave. is now home to City Yoga. Yes, a developer did a good job revitalizing that site. However, it was the Indy Winter Farmers' Market that opened there last November that brought hundreds of people every Saturday to this urban neighborhood, many of whom had only driven through it previously on their way downtown. It didn't hurt that Goose the Market, another huge food success, is located just around the corner, suddenly making the area of 24th St. and Central Ave./Delaware St. a one-stop shop for weekend foodies. Housing the winter market even temporarily convinced tenants like City Yoga that its clientele will come to that location while also making it more profitable for the developer and landlord.
This year, that same developer, Larry Jones, is housing the Indy Winter Farmers' Market in his latest investment at 9th and East St. I have no doubt that this will draw the increasing number of downtown or near downtown residents who have only one grocery store in the mile square.
There are several other great examples of how quality food influences place, builds community and boosts economic development. The key is to learn from these great examples and multiply them across our community.
With this in mind, I invite you to join me for a 2009 Spirit & Place Festival dinner and discussion:
Local Food Trends: Growing Community, Economy and Mutual Delight
Sunday, Nov. 15, 5:30 p.m. to 7:30 p.m.
2442 N. Central Ave. (former location of Indy Winter Farmers' Market)
Bring your favorite dish to share for a potluck dinner and learn about how food influences places, builds community and boosts economic development. Neal Brown, former chef owner of L’Explorateur, will prepare a main course.
Speakers & Presentations
David Wu, policy director, City of Indianapolis – “The Power of Place and Food”
Panel discussion: Neal Brown, Laura Henderson, founder/market manager, Indy Winter Farmers’ Market; Matthew Jose, founder/owner, Big City Farms CSA; Chris Eley, owner, Goose the Market; and Janine Betsey, executive director, King Park Area Development Corporation. Facilitated by Gail Payne, owner, The Goods: Thoughtful Marketing, Authentic Living and Marc McAleavey, Indianapolis Neighborhood Resource Center.
Round-table discussions: Participate in small group conversations about various local food initiatives such as “Dig In” (the new Taste of Indiana event), a food vision for east 10th Street, urban farming, Indy farmers’ markets, community kitchens, and “Food for Thought,” theme for 2010 Spirit & Place and Indiana Humanities Council initiative.
The event is free. Donations accepted to benefit the Indy Winter Farmers' Market
Space is limited. RSVP by Nov. 12 to Gail Payne: 317.985.5523 or Gail@TheGoodsLife.com.
Posted by gail payne, apr at 5:15 AM No comments: 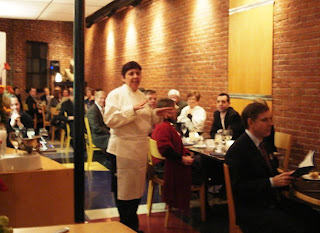 January 20, 2009 was a very special day. It was the day that the United State of America inaugurated its first African American President, Barack Obama. On that day, we all celebrated, regardless of our differences, to take in, just for a moment, the history that you and I were living to tell our children and grandchildren when they ask: "Where were you on that day?"

I did not intend to go to Washington, DC, but I also did not want to celebrate this once in a lifetime event alone just watching tv. As I did with the campaign, I wanted to share it with my friends and even strangers who wanted to be with kindred spirits, too.
Ironically, or coincidentally, this could also describe what I aim to achieve with The Goods: Authentic Living. It will be a series of events that combine my areas of interest: arts, culture, fitness, the environment and the local food economy with those who also seek a deeper understanding, experience and desire to know others like them.
The inauguration provided the perfect opportunity to officially launch "The Goods: Thoughtful Marketing, Authentic Living" and to host the inaugural Authentic Living Series event.
The evening achieved all of my goals: beautifully prepared local food by chefs and artists Regina Mehallick and Greg Hardesty and hosted in Regina's wonderfully authentic neighborhood favorite, R'Bistro; wines selected by next-door-neighbor, Jill Ditmire at Mass Ave Wine Shoppe; personal toasts from Harry McFarland and Lisa Keenan; a colorful keynote speech by historian Dan Miller president of Historical Solutions, who wove the similar plights of Abraham Lincoln and MLK to President Obama; and a sell-out crowd of nearly 60 kindred spirits who enjoyed meeting for the first time or getting to know each other better.
Its about building community, expanding our networks and minds while supporting local businesses and causes.
Don't just take it from me. I've received good reviews, including this one from Pam Velo:
"This is such a magnificent concept and you deserve a medal for conceiving it and implementing it in such a classy, thoroughly enjoyable way. This is something this community will really benefit from. ...This concept captures really interesting new people to meet, and excellent food and wine (necessary components to a great time in my book!). Congratulations for coming up with this and making it happen. It was the perfect end to a perfect day."

Here are some photos from the event. (Special thanks my assistant cameraman, Greg Perry).
Thanks to all who attended, and even those who couldn't be there, who have helped me reach this milestone.
Future Authentic Living Series events are underway.
Tell me what you want you think would make a great Authentic Living Series event.
Posted by gail payne, apr at 7:56 PM No comments: