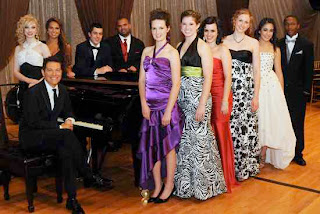 I've had the very good fortune of managing the Michael Feinstein Foundation's Great American Songbook High School Academy and Competition from its inception in 2009 and its consecutive year in 2010. High school students from Indiana, Illinois, Ohio, Kentucky, Iowa, Michigan and Wisconsin were eligible to apply. Ten were invited to Indianapolis June 2-6 to compete for $500 scholarships and the chance of a lifetime: to perform in Michael's famous cabaret club, Feinstein's at Loews Regency in New York City.

The Feinstein Foundation's goal:
Create a competition for high school students that will teach them about the music of the Great American Songbook and encourage them to continue appreciating it.

The Goods' approach:
-- Assembled a team of local and national experts to advise on the competition.

-- Developed a plan and budget for a 4-5 day Academy and Competition in Indianapolis and negotiated contract to secure partnership with University of Indianapolis.

-- Developed and executed a fundraising plan to attract as much funding as possible to cover expenses. This included sponsorship packages and fulfillment, mailings, strategic donor solicitations, and special events including a cocktail reception and fundraising dinner.

-- Created and managed the adjudication process including processing all applications, recruiting adjudicators, creating a system for scoring fairly and applicant notification.

-- Created, managed and produced the 4-5 day Academy and Final Competition including coordinating all meals, overnight accommodations, conference rooms, audio/visuals, and hired accompanists and other necessary staff or volunteers.

-- Promoted the events surrounding the Academy and Final Competition and managed RSVPs and tickets for all events, which included mailings, advertising, media relations, and online communications.

In its second year, the Academy and Competition really blossomed:
-- applications increased 400% and received from all seven eligible states

-- some of the best performers, teachers and music professionals participated as judges and coaches: including Michael Feinstein (of course), Sylvia McNair, Catherine Russell, Susan Powell, Richard Walters and many others from our own Indianapolis backyard: Dr. Kathleen Hacker, Steven Stolen, Shannon Forsell, Mark Gilgallon, Gary Walters and David Duncan.

-- the University of Indianapolis and its spectacular Christel DeHaan Fine Arts Center provided the perfect venue for daily classroom rehearsals, master classes and the final performance. (And its staff were consummate hosts.)

-- Even though two states were added in this second year, the budget only grew 37% from the first year; cash sponsorships were five time higher and in-kind sponsors increase by four times over the first year.

The bottom line:
It's not quantifiable, but it's the magic that transforms these already incredibly talented young performers into stars who form a stronger bond of camaraderie than competition in just a few days. The time they spend learning everything about vocal performance and, most importantly, the uniqueness of this music, its stories of our nation's history and how it should be personally interpreted -- is completely priceless.

Watch a video of the 2009 finalists and winner produced by The Goods, Kyle Travers and WFYI Productions.
Posted by gail payne, apr at 10:01 AM No comments: