"Chew On This" creates city-wide community and meaningful conversation 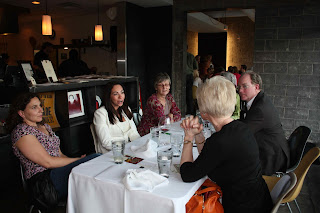 On Tuesday, May 4, The Goods planned the first "Chew On This" city-wide dinner conversations for the Indiana Humanities Council (IHC). Nearly 150 people at 9 locations around the city were talking and Tweeting about food and how Indiana can best leverage its strengths around food.

PHOTO: One of several Chew On This tables at Recess.

The Indiana Humanities Council's theme for 2010-2011 is "Food for Thought" and its goal is to get people reading, thinking and talking about food topics as "a celebration of food and its role in our lives."

With restaurant or potluck options in various locations around Marion County and prices ranging from free/bring-your-own pitch-ins to $50 prix fixe menus, the public was invited to participate in this experiment in bringing friends as well as strangers face to face to share a meal and discuss: "How can we use Indiana's strengths in agriculture and artisanal food to position Indiana globally?" This was also tied to the book "Caught in the Middle" by Richard Longworth and a recent topic of the Indy Talks Series.

IHC goal:
Make this accessible and affordable for anyone to participate. Locations should be as evenly distributed around Marion County and offer a variety of cost options. Keep groups to 20 or less to foster the best small group dialogue.

The Goods' approach:
We researched potential venues, presented recommendations and negotiated venue agreements that clearly articulated what IHC needed from the venue (e.g. prix fixe menu, space for group of 10-20, payment arrangements) as well as what IHC would provide (e.g. promotion in Chew on This marketing city-wide, coordination of RSVPs, assigned volunteers to greet guests and manage on site issues on behalf of IHC). We ended up with six restaurants and three pitch-in locations. Some of the locations further from the downtown area attracted too few participants and were merged into other locations.

The Goods' approach:
We recruited several of our friends and colleagues who are both passionate and knowledgeable about food issues to serve as facilitators and note-takers. The Goods created a facilitators guide with general information about the topic and the book and led orientation meetings to provide further guidance and gather feedback on the evening's agenda. Facilitators and note-takers were given a basic outline agenda to follow with suggested questions should the conversations need fueling. Note-takers were asked to summarize the discussion into a few categories and collect surveys from participants. Most locations had multiple people Tweet about the conversations, which were then shared among all groups, creating a real-time virtual conversation across the city.

The results:
Nearly 150 people at 9 locations around the city were talking and Tweeting about food and how Indiana can best leverage its strengths around food. Many participants asked for more... more information, more dinners, more ways to get involved. Given such a diverse group of participants, I was impressed with the level and intensity of the conversations. Regardless this diversity of people and venues, much of the conversations came back to similar issues such as quality vs. quantity of food, access and social justice issues, or education and outreach.

The bottom line:
We all live in silos and rarely have an opportunity to engage with friends and family in meaningful conversations that go beyond the surface. I loved how this multi-venue experience provided ways for anyone to engage face-to-face, sharing a meal and a meaningful topic together. Rather than having the experience via Twitter or Facebook, it was a tool to enhance the experience. (Although it's a nice bonus that others could follow online who could not be there in person.) Maybe you met someone knew. Maybe you found out something new about an old friend. Maybe you learned something that will inform your daily life. That's inspiring and worthwhile and an authentic living experience.
Posted by gail payne, apr at 8:49 AM